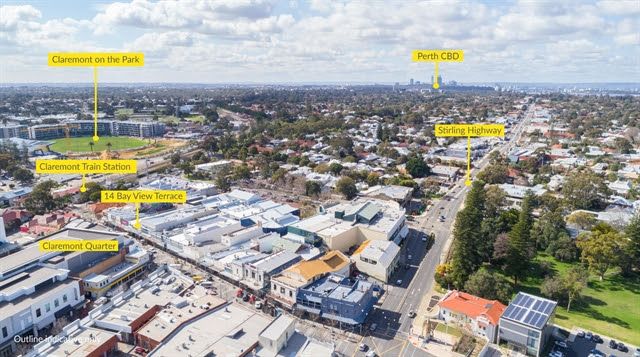 A LOCAL investor has purchased a supreme prime retail opportunity as 14 Bay View Terrace in prestigious Claremont sold for $2,687,500.

The property, that came with 131.7sq m* building area on a 202sq m* land size, was a single-storey retail freehold building boasting an exceptional and high-exposure location.

“This opportunity attracted both local and interstate buyers wanting to take advantage of historic low interest rates and the higher yields in Perth as a result of the surging WA economy.

“It’s in the heart of the Bay View Terrace shopping strip, boasting fantastic exposure, and is directly opposite the renowned Claremont Hotel and main entrance to the Claremont Quarter.

‘It’s highly accessible to public transport with Claremont train station at the top of the street, has on-street parking, and is surrounded by affluent demographic, popular cafés, restaurants, world-class retailers, and other amenities.

“Another appeal was the fact the property had a new shop front installed and had rear laneway access which allowed for potential dual activation.”

“The locality has improved significantly over the past 18 months. We’re starting to see the Terrace come back to life, partly due to increased population from higher-density developments such as Claremont on the Park and The Grove (currently selling),” Mr Pavlos said.

“We’ve seen a number of historic vacancies leased in the past six to 12 months for uses including health, beauty, lux, hospitality, and financial institutions.

“Traditionally, a number of these uses would be drawn into Claremont Quarter, however in recent time, we’ve seen a shift back to the high streets as rents have fallen to sustainable levels and business and consumer confidence is back on a high.

“Bay View Terrace has always been the premier retail strip in Perth. It’s taken some time to redefine itself however these premium properties are always the first to bounce back as the economy shifts into gear.

“It’s still got a long way to go to get back to its dizzy heights of 2008 when rentals were around $2,500psqm, but one thing is for sure, the strip is back, back in demand, and on the way up.”